What Is the Difference Between Brewing and Distilling?

Brewing and distilling processes are very similar, but also very different. During the brewing process (or distilling beer) you’re taking the grains, crushing them up, and extracting the starches. These starches are converted over to sugars, which are then placed into a fermentation vessel. Next, yeast is added to create alcohol. This whole process, creates low volumes of alcohol.

Distilling (or the distillation of alcohol) begins with a nearly identical process to brewing. The same steps are taken – where you take those starches, convert them to sugars, and then put them in a fermentation vessel – however, distillation goes one step further. After the “brewing process”, the liquid is boiled to extract that alcohol and the steam is condensed into a liquid with a far higher alcohol concentration.

Another difference between distillation vs brewing is the grain. With brewing, a malted barley is used and the milling step only involves an initial crush. Also, the husk is kept intact to create a good filter to be able to strain liquid off. On the other hand, with distilling, there is typically an un-malted corn, rye, wheat, or barley that is used depending on the type of spirit being made. Malted corn or barely can be used but this is not as common.

What Is the Difference Between the Equipment Needed for Distillation vs. Brewing? 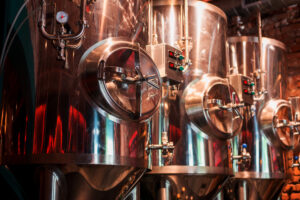 The equipment for the brewing process is different from the equipment used in distillation. In brewing, the initial crush on the grain is only a coarse grind, where the husk is kept intact. As a result, the roller mill will be set up with a wider gap between the rolls. Typically, you use at least a two-roll mill. Oftentimes, a four-roll mill will be used to achieve a more efficient crush.

With distilling, typically in a grain-out process, a four-roll mill is the best option. Not only does a four roll mill provide a finer grain (as is needed in the distilling process), but it also helps grind the, typically, harder grains that are used such as unmalted corn, rye, and wheat. In the grain-in fermentation process, a six-roll, eight-roll, or even a hammer mill is recommended to create the finest and most consistent possible milling.

What Are the Steps in the Brewing Process, and How Is Distilling Different? 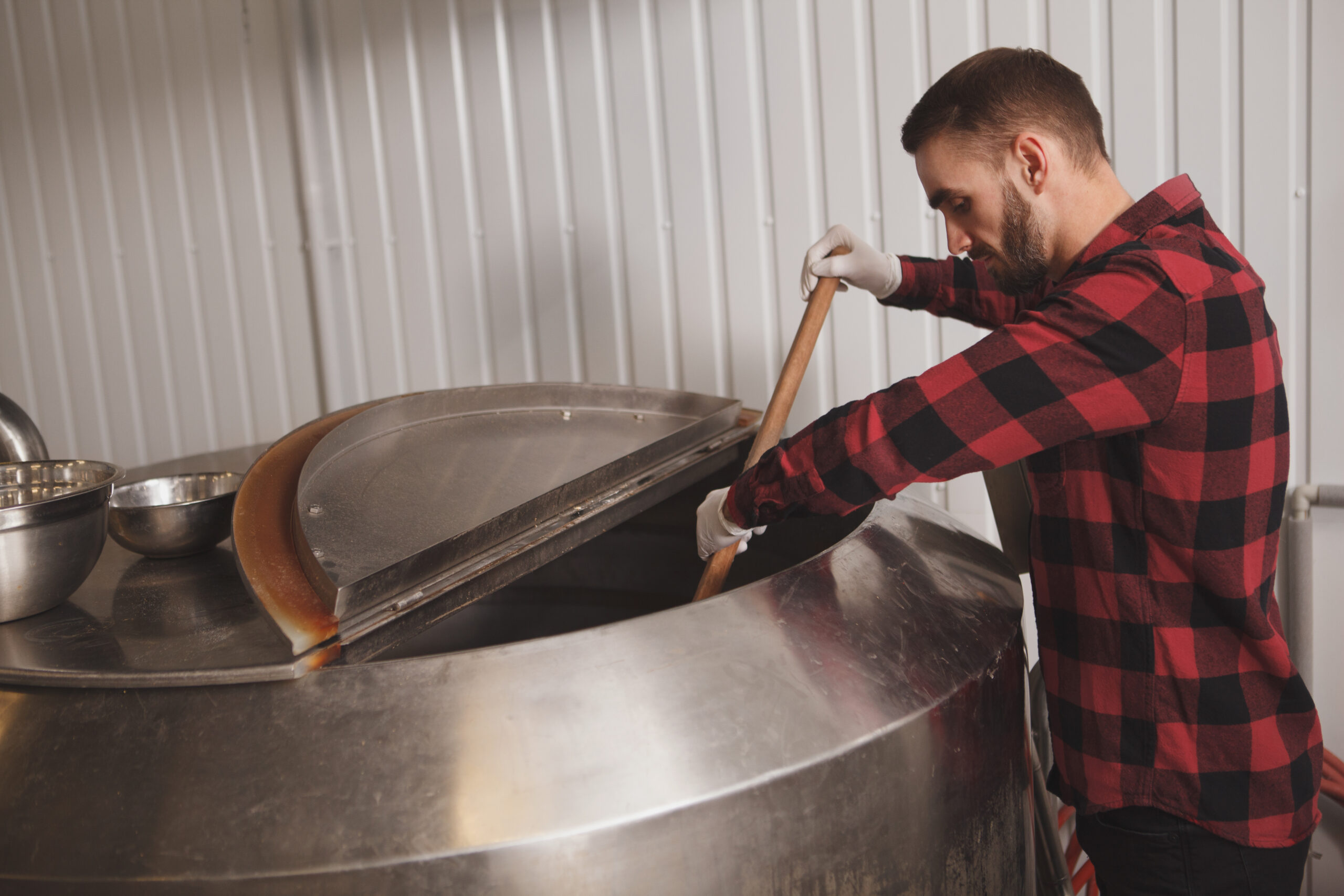 If you’ve ever wondered “how to make beer”, here’s your answer! The first step even before brewing is receiving the malted grain. The malting process essentially consists of getting the barley wet and letting it stay wet for long enough that it starts to germinate. Once that is completed, the water is heated or hot air is added to that barley to stop fermentation. This provides a jumpstart on converting those starches over into sugars. A big difference between brewers and distillers is that most of the ingredients in beer are going to be malted, and distillers typically use unmalted grain. That all typically happens before it even enters the brewery.

The next step with brewing is taking the whole grain and milling it down. This separates the husk from the “endosperm” and provides an initial crush on the endosperm. This coarse crushed malt is then put into the mash tun, where the malt and water are combined together. This starts converting those starches over into sugars. The temperature that the mash is set at will change the sugar enzymes coming from the malt. After the mash process, the mixture is left to sit for an hour.

The next step is lautering – where the liquid (or “wort”) is strained from the solids. This involves a process known as “sparging” – where clean water is added to the mash and the wort is separated from the grain. From there, the hot, sugary wort is converted over to a kettle and is boiled for 60 to 90 minutes. During that boil process is where hops are added. Adding hops in at different points of the boil will give different flavor profiles, and change the bitterness of the beer.

After boiling, whirlpooling is done. The hot wort is either pumped into another vessel called a “whirlpool” or is recirculated into the boil kettle, creating a whirlpool effect. This separates the solids and helps extract some of the visual matter from liquids. Then, this hot wort goes to the fermenter, passing through a heat exchanger. The heat exchanger brings the temperature down as quickly as possible to fermentation temperatures so that the yeast doesn’t die.

In some instances, that is the final process before bottling. However, depending on the style of the beer, more yeast is added in the fermenter. In those cases, the yeast feeds on the wort and creates both CO2 and alcohol. Once this is complete, the beer is ready to be packaged in cans, bottles, or kegs. The beer is put into what’s called a “bright tank”, where it’s going to either be packaged, or poured directly into a serving vessel.

Distilling takes it a step further. After fermentation, the liquid is put into either a “pot still” or a “column still” and is boiled again. The still recaptures the evaporated alcohol that comes off of that liquid. This alcohol is then condensed and either put into barrels or put into containers for serving.

How Can RMS Roller-Grinder Help? 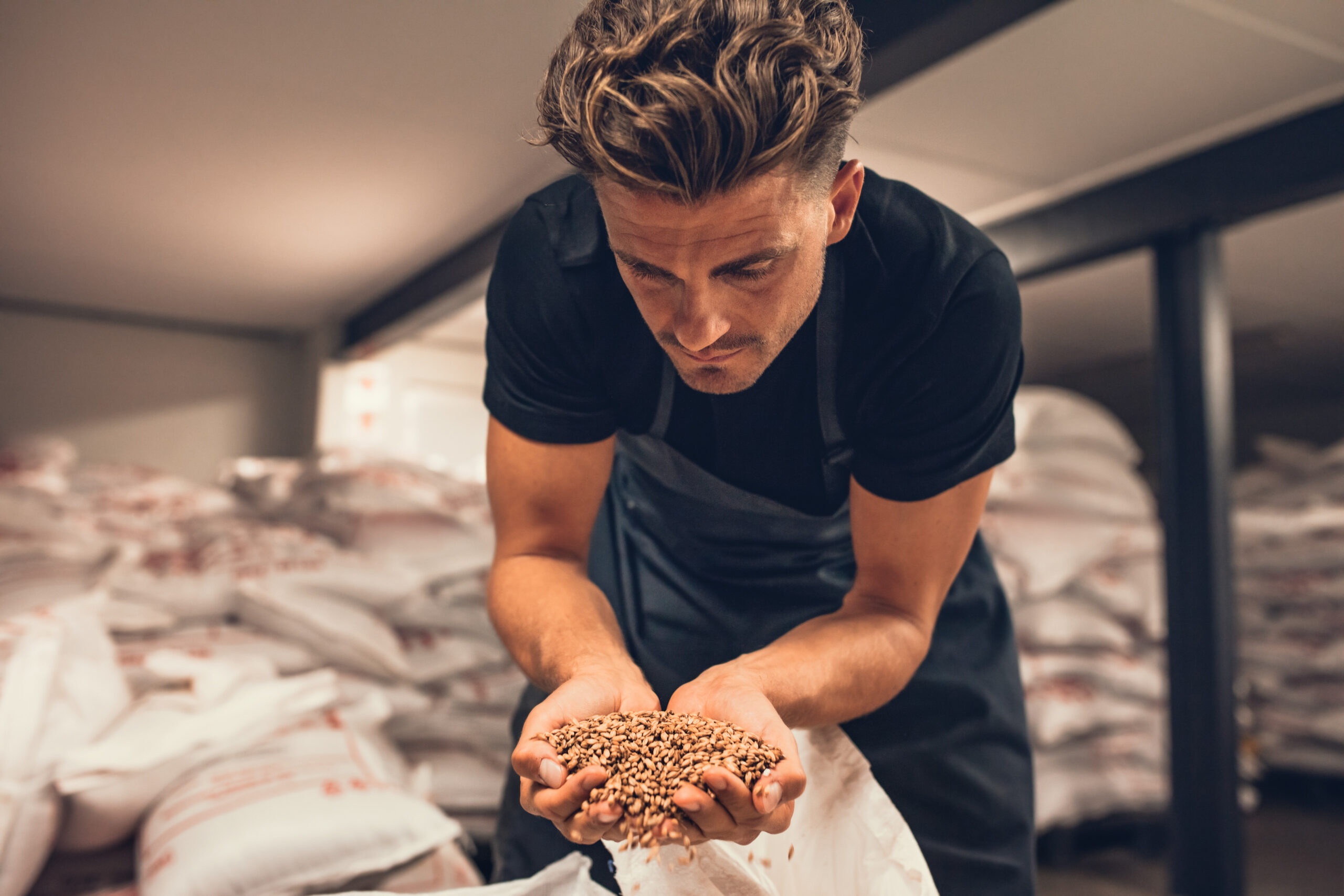 RMS believes in partnering with customers for long-lasting partnerships. Whether it is providing equipment, giving guidance on what direction makes the most sense, or putting you in contact with experts who can answer industry-specific questions, RMS is here for you.

We’re not just equipment manufacturers trying to sell you a piece of equipment. We are here for continued growth, whether you’re established or just starting out. From a startup brewery to a large distillery looking for an expansion, we have a wide variety of solutions. RMS can help you get going in the right direction, or get you directed to somebody who can help.

When you’re ready to level up your brewing or distilling process, or if you have questions about brewing and distilling equipment, RMS is ready to help. Schedule a discovery call today!